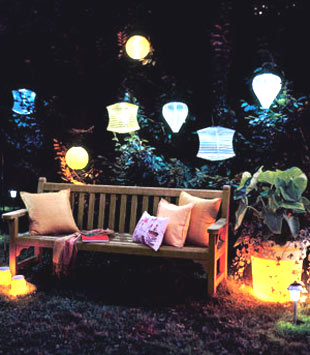 You know IKEA had some time ago very nice solar lights for outside. I bought a couple of those fairy lights. Inside are LEDs and they give pretty good light, joy! But then suddeny I had a problem: my solar lights started blinking.

It seemed that the little solar panels were a bit hidden and didn’t get enough sunlight to charge properly. So the neighbours weren’t too happy about our nice blinking walnut tree, because that’s what they do when they are not charged fully: they blink! Blink! Blink! Nice if you want an out-door dance floor 🙂 If sunlight isn’t the problem, they also blink when your batteries fail to charge properly (ie. when they’re old), or when the solar panels are dirty.

Unfortunately it’s quite normal to see a decline in performance after one or two years after purchase and the fairy lights start blinking. First you have to clean the solar panel(s) and see if that will solve the problem. Dust and other residues have a bad affect on charging. If that doesn’t help, and your solar lights keep flashing or don’t work at all, open the battery compartment and replace the rechargeable batteries with new ones, because the included cells are usually the main cause of failure.

If you’re not sure if your lights are still working, replace the old rechargeable solar batteries with normal batteries or fully charged batteries from another device (somewhere on the unit is a little panel with some little screws, this is usually the battery cover). Turn the device on and cover the solar panel(s) with your hand or some paper, this will trigger the lights to burn. If the lights turn on and are more bright and not blinking, then you have to replace the original included batteries. Usually these are AA or AAA rechargeable batteries which can be found anywhere. For a picture what to expect, visit this article I wrote about sun jars.

Some people choose to replace them directly after buying solar products, because usually the factory ones are of poor quality and you get better power (light) output when you replace them with better ones. If you replace them with NiMH batteries with a high mA (milliampere) of around 2000 or more, they will have a longer lifespan. It will also take longer to fully charge them though!

NEWS FLASH: This year (2017) I bought some new fairy lights and somehow they got rid of this blinking problem. Now they only shine less bright if the batteries don’t have enough juice.

Where to shop for solar fairy lights

64 Comments on “Solar fairy lights and how to repair them”