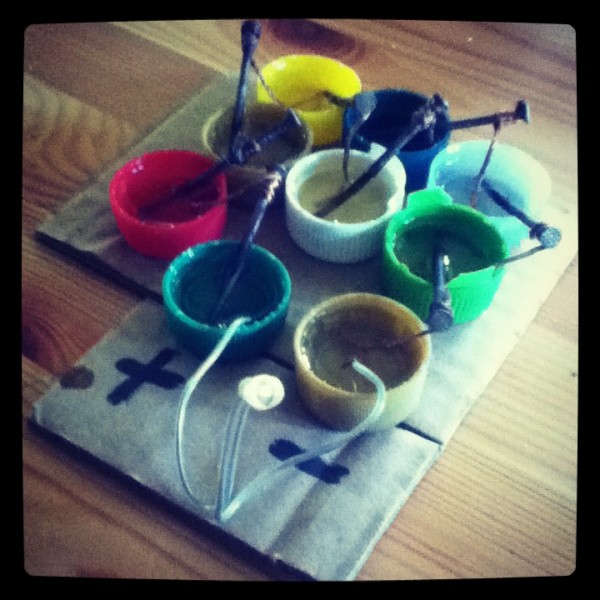 Always wanted to make your own battery? Home brew electricity! Maybe you already heard about salt water batteries made from sea water, but this is something you can easily do at home in a few minutes. This homemade vinegar battery is based on two different metals suspended in an acid solution. Produce electricity from vinegar, which acts as the electrolyte! Electricity is generated by reaction of the two different metals (the electrodes) with the vinegar (the electrolyte). So you can just place two different kinds of metal in a conducting solution and that’s it, you get a battery!

How to make a vinegar battery

You’ll need two different kinds of metal, for example copper and zinc and some acid liquid.
The copper is the + and the zinc is the –

The electrons travel from the – through the electrolyte (acid) to the + and creates an electric current.

You’ll have to gather

The copper wire you can get from for example an old (or new) power cord. You can do this with one, or -in my case- 9 bottle caps. Fill the bottle caps with vinegar (no vinegar? Try it with lemon, orange or apple juice or whole lemons). Doesn’t have to be to the rim. 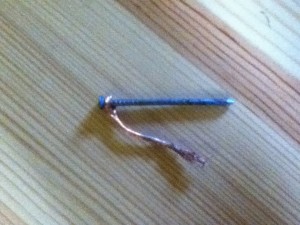 If you have stripped the copper wire from the power cord, cut it in about 2 inch pieces (about 5 cm.) and tie one end to a nail.

If you have 9 caps, repeat this with 8 other nails.

When you’re done, put one end of a copper wire in one cap, and the nail which is tied to it in another cap.

Then take another nail and put the nail in a new cap and its copper wire with the nail from the first one. Don’t let the metals touch each other (it won’t electrocute you if it happens, there is hardly any current to produce any sparks).

You’re now basically wiring a serial battery. Every cap with a nail and copper wire is one vinegar battery! So now if you’ve done that, your battery is reading for use. So the first cap has a nail and the last one a copper wire.

If you have a multimeter, hook it up to see how many volts you’re getting. Now, mine showed a voltage of around 4 volts. 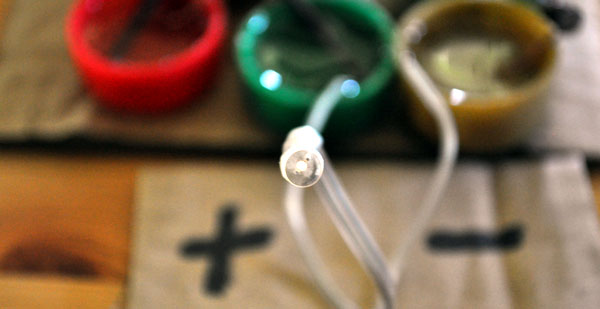 Not enough to run your fridge with it unfortunately, but I found a LED somewhere from an old garden light and hooked it up.

You can try making diy batteries with all kinds of stuff, I got 0.5 volts from buttermilk and icetea. Salt water also works. If you connect a Joule Thief to it you might actually charge a battery with this one!

UPDATE: Instead of vinegar I used water! Guess what happens…

You need an acid powered gift? Then you might be interested in one of the following science kits, available on Amazon for just a few bucks. Run a LCD clock on a lemon or potato!