Building a DIY stirling engine was high on my list for quite some time, because it seems a cool idea to have an tin can engine running with the sun as fuel. But before I would build a solar driven stirling engine I first had to learn how such an engine works, so I finally tried building one and I…failed! Miserably. So that was quite frustrating but it was also fun to do and I learned I lesson I guess: to have patience and work accurately. I searched the internet and youtube for some nice plans for DIY hot air engines made from cans like this diy stirling for beginners and this easy-to-do LTD stirling engine which -according to the siteowner- should take no more than 1 hour to build. So after 10 hours I ended up with a total useless pile of junk, glue, melted plastic, and it didn’t turn… Only if I ‘helped’, it would spin like once. I made a picture before I smashed my homemade engine to smithereens (a feeling I already surpressed for some hours…). 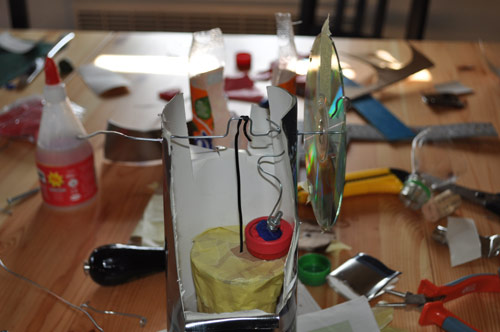 So what you see here is a whiskey packaging tube (carton! What was I thinking…), and inside is a 250 ml. soda can. Inside the soda can is an empty toilet roll used as displacer, on top the piston, made from a (heart-shaped) balloon. Held together with some tape, glue and some wire. So what went wrong? 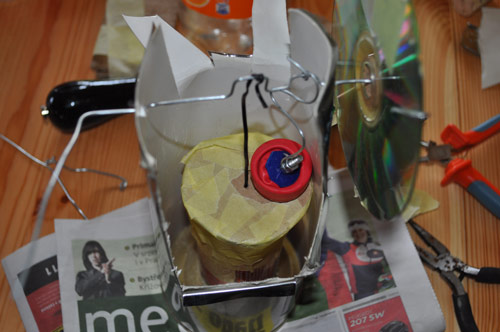 Simple. A lack of patience, a lot of air leaks, a lot of friction, and a lack of patience. And I think I didn’t cool the top enough to make a sufficient difference between hot and cold. A LTD stirling engine (Low Temperature Differential) has to be made with some accuracy, there are even engines running on the heat of your hand, but to make one of those requires a fair amount of precision… So, up to the next model! Stay tuned!

UPDATE: Read about my second attempt to build a small diy stirling engine.